Time in Toronto went by really fast. Now I was already leaving. I said goodbye to my friend whom I was staying with during my stay in Toronto, and headed towards Union Station. Once I got there, Union Station was a huge mess at the time. It was a bit hard to navigate without clear signs, and there were lots of little steps everywhere, which made it a bit of a pain with a suitcase. Luckily, I only had a small carry-on suitcase, a personal bag and a small backpack. 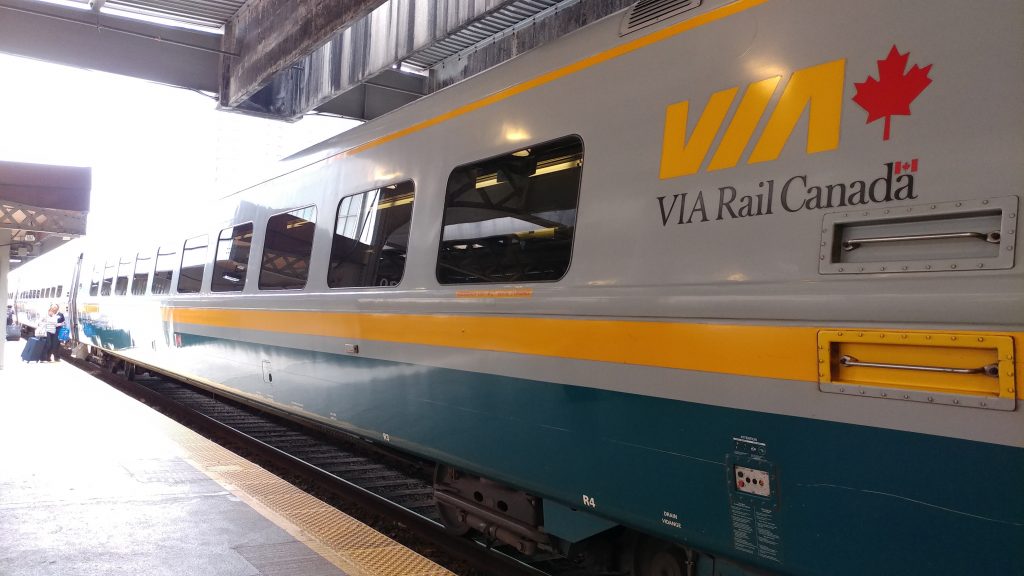 My first ride of the VIA Rail Canada!

Living and growing up on the west side of Canada, I never got to ride the rail system. I had looked into going via train between Vancouver and Calgary, but unfortunately, the route only took you to Jasper and it was super expensive. I had ridden many times outside of Canada, even the bullet train in Japan, but I was still pretty excited to experience my first VIA Rail ride.

I know that with today’s technology, I shouldn’t be so happy to see WiFi available on the train. It was really convenient having food service, bathroom and nice big windows to see the scenery. I was sitting on the right side which didn’t have much to look at compared to the left side, but still, it was nice.. The ride was comfortable and since it wasn’t full, I got two seats to myself! I loved it except the AC was too cold. Other ppl looked like they were chilly too. The food selection is small and pricey, but aren’t all food service on transit. I got the Seasonal Sandwich – turkey and coleslaw $7

When I got to the station in Ottawa, it was unclear if the public bus came to the station. I thought it was odd not to have one, but Google told me it was somewhat of a walk, and the route seemed kind of weird. I thought it was glitching. Anyways, what I should have done was to ask the staff at the station, but being shy, I avoided the situation, and decided to take one of the cabs lining up in front of the station. It was 10 min away, but it costed $15+tip.

Here in Ottawa was my first ever Airbnb! I was unexpectedly surprised with the cleanliness of the place. The room was fairly large (sorry, I coming from a condo in downtown Vancouver…) Towels, WiFi, shampoo and breakfast (oatmeal and cereal) were included. Carolynn, the host was super helpful and nice. Because it is an older home, it does creak every time you walk or open the door. I wasn’t sure if the window was always open or not. It seemed like it was open, but from what I could see, it was ‘closed’. I’m not sure if it’s because of this, that the sound from outside was quite prevalent. It’s a block from the busy street of Bank St, so it’s quiet during the day, but at night, there are some louder cars and people talking loudly going by. The window glass shutters every time wind blows, or someone bangs the door in the building. 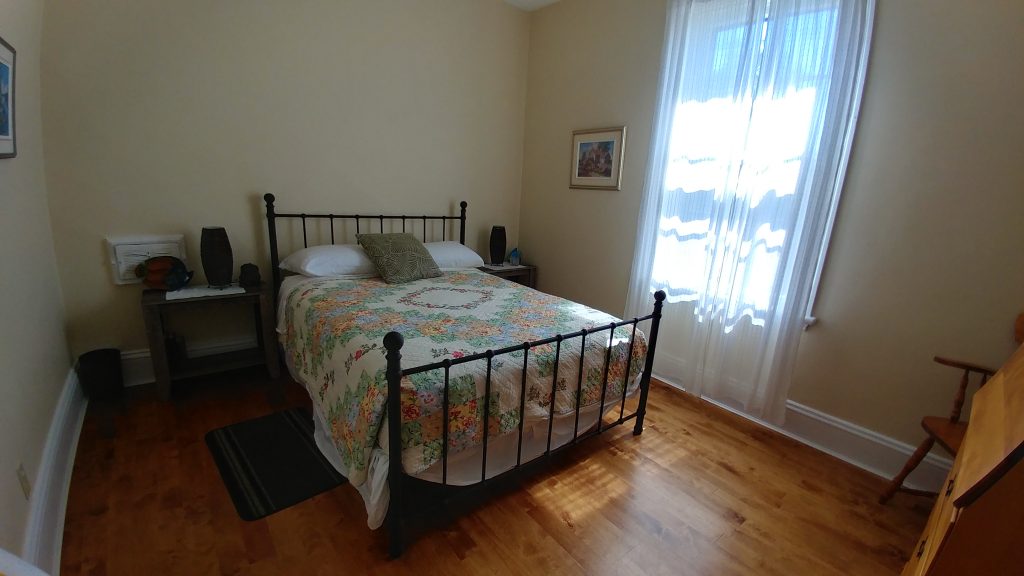 This Airbnb is separate from where the owners live, so there are only 3 bedrooms, a full-bathroom and a little place for the ‘kitchen’ and a balcony with table and chairs. I kept thinking that the sounds were from the other Airbnb users, but it might be from the next house (the owner). Kind of like a side-by-side, very narrow duplex. The AC seemed to always be in effect, so it was nice and super cool when walking in from the hot outdoors. But after I while, I found it a bit too cool for my liking. But that’s just me. I’m always cold.

The curtain is a fairly translucent white cloth…it doesn’t keep much light from outside, so if you’re the type that wakes up in the morning with sunlight, remember to bring an eye mask. It doesn’t bother me, so it was ok. She had milk, water bottles, bowl of fresh fruits and paper map ready. She even met me in person to show me the website on the mobile on how to use the public transportation site. She kept in touch with communication over the Airbnb app and even apologized for the noise her baby made one night, but I didn’t even notice because of my earplugs.

The only cons were the dark trees right by entrance door, and no light at night. Can be a bit creepy, and hard to press the code to get into building in the dark. WiFi code was not given until I asked for it when I arrived. I would have been able to contact her if I had not had mobile reception with data included.

I walked down to the Parliament area. 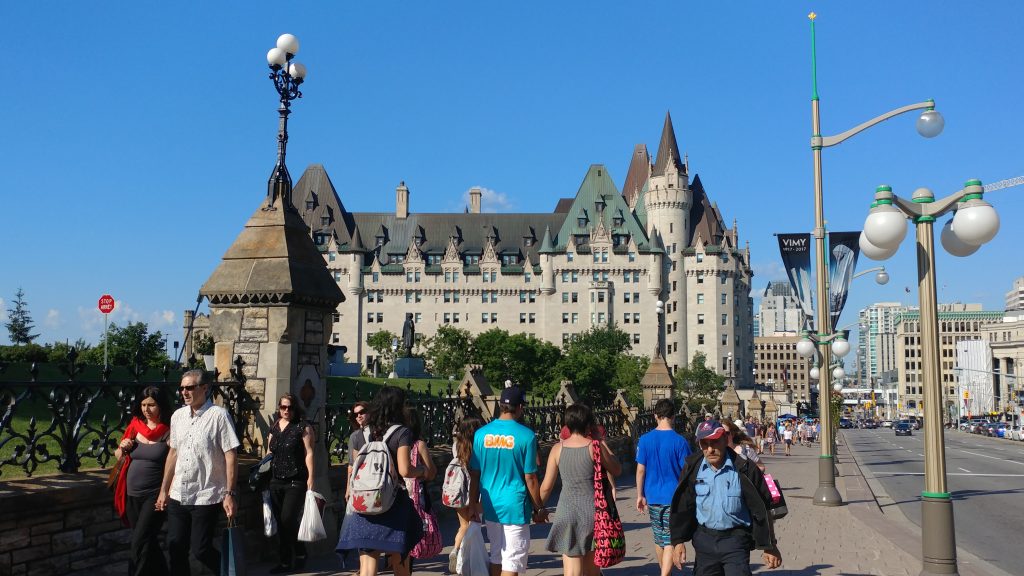 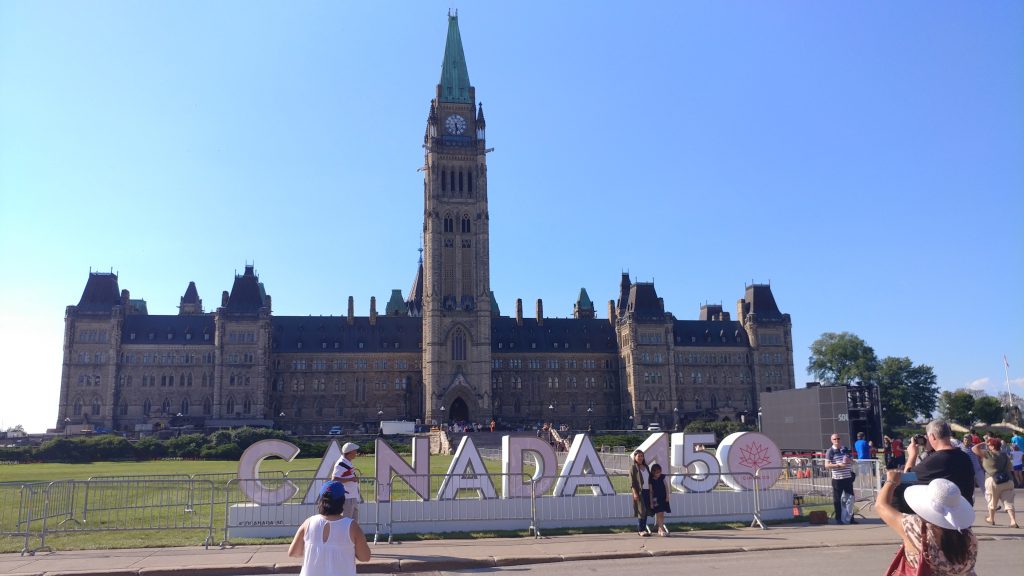 For dinner, I stopped by Truc Pho on the walk back to the Airbnb. It was a bit pricey. More details at IdeaRabbit.ca later on. I wanted to go back at 10pm to see the Northern Lights show at the Parliament, but I was too tired…I figured I could go the following evening.