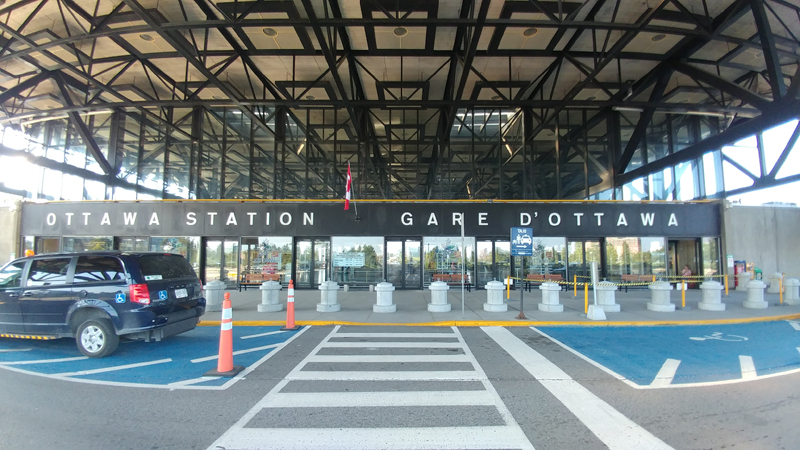 The view as I got off the bus! So it was convenient after all!

Up early again to get to the VIA Rail Station to my next stop: Montreal. This time, I decided to take the bus, saving me almost $14 compared to a taxi. I was concerned as Google Maps had shown that the bus stopped super far from the station and the route went all over the place. It may have been due to some construction along the route. The bus exchange area was all new, and there were all kinds of signs up. Anyways, the bus stopped right in front of the entrance of VIA Rail Station! Wow! I wish there were more info or signs at the station to indicate that the buses are available to get around from the station. I definitely should have asked a staff at the station when I arrived. Boo… oh well, can’t change the past. Must move on. 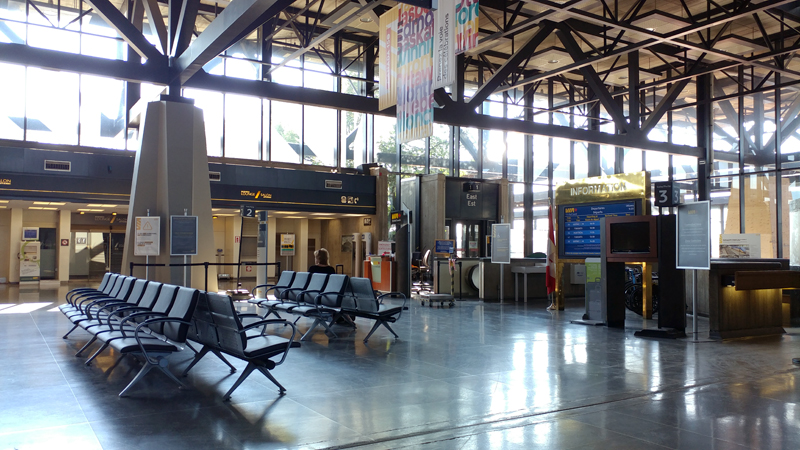 Waiting at VIA Rail Station in Ottawa 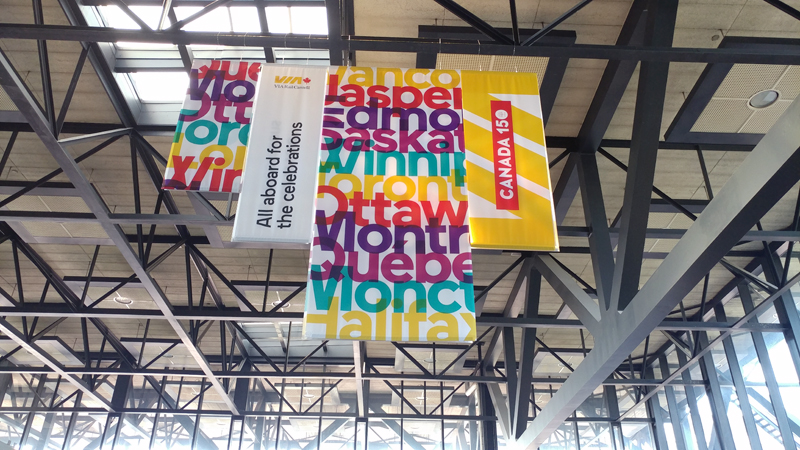 The line up for VIA Rail was weird. I started lining up behind a family, only to find out that they were standing for the business class line. There were no signs or anything. Once everyone was processed with tickets, the staff let the business people go first. Then a bunch of people got up from their seats and proceeded to the gate. They were let in right away, leaving us the Economy behind, though I wasn’t sure if they were business or economy because it was so random. 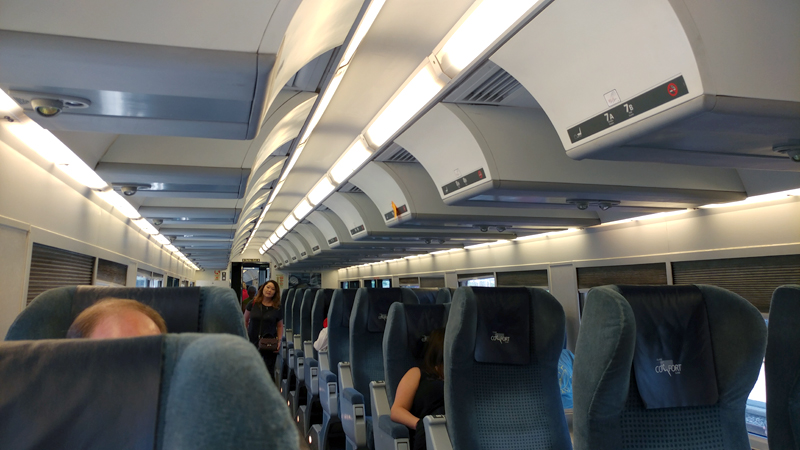 Again, the interior was really nice. A different layout from the last one. I got the single seat on the right side by the window with a fairly large table. I did have to face a businessman sitting on the other side, but it was nice and roomy than the two seats side by side. 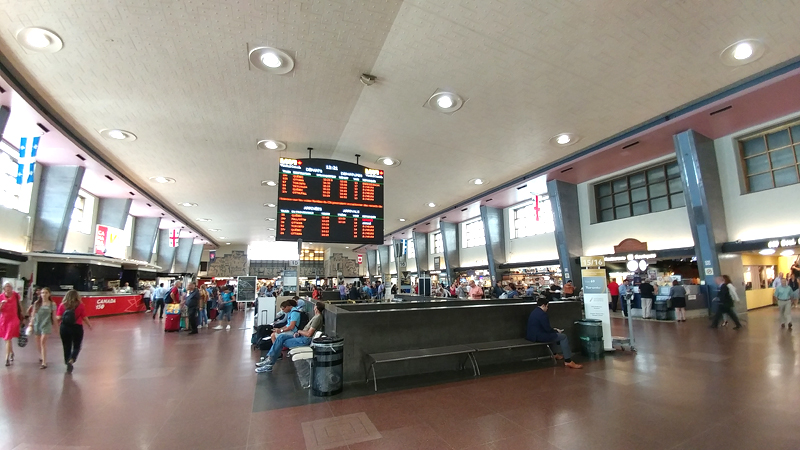 VIA Rail station in Montreal!

French went in one ear and out the other. I tried learning French a few years ago, but failed to learn or continue. My ears would prick up if I heard German though. I was nervous about not speaking French, but it seemed like in Montreal, everyone spoke both. 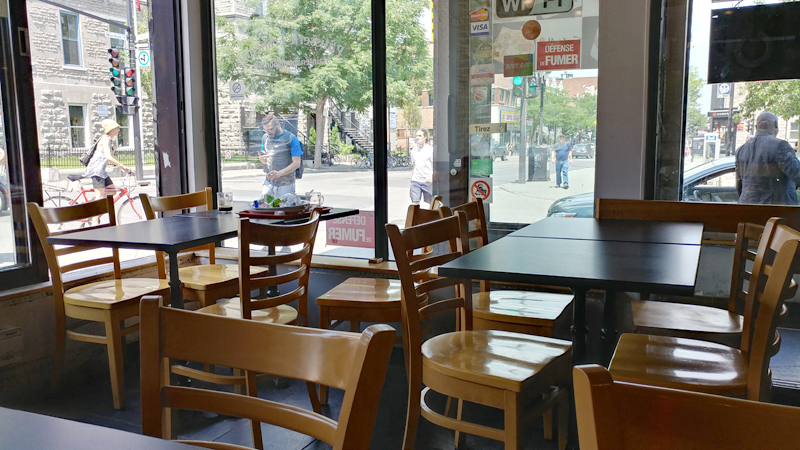 Killing time at the Cafe Noir

I tried to maneuver through town with luggage, but it was too painful, not to mention I was super tired and sleepy. I got to my hostel early, so I had a late lunch and wrote into my laptop to kill time in the cafe below the accommodation at Cafe Nori. Their WiFi wasn’t working, so I had no internet access. I watched people around me to keep me entertained. I watched people who were out and about on a normal weekday. What kind of people are out? I saw tourists, seniors and those that seemed maybe ‘homeless’ in the cafe. But out on the streets, there were all types of people. Were they entrepreneurs? Or had one of their weekdays as their weekends? Did they not have to work? Because they had lots of money come in while they roamed about? Or receiving EI or welfare? Or just getting by?

I was there from in the cafe 1:30pm-2:30pm. In that time, a man across from me sat with his mouth open, his belly touching the table. Moaning and groaning as he looked at his cell phone. He didn’t seem pleased. He seemed disabled. A limping old man came in sat down to the table next to me, dropped off his backpack on the booth seat and sketchbook on the table. He went to grab coffee, and then returned to the table to grab his stuff, and left his backpack there. But after a while, he kept coming and going.

A man in his early 30s had been sitting at another table, listening to his music. He just sat there forever it seemed. Another old man with messed up hair and thick glasses sat next to him, coughing as he was gagging. I’m not sure if he was homeless. Then there was the woman who would drag out a chair from inside the cafe to outside on the sidewalk to have a smoke. Bring the chair back in, then go out after 20 min. Other old solo ladies would come in to get a coffee and sit there, not sure what they were doing…

Then there were the young guy looking at his slim Macbook. Maybe a student? Maybe a new entrepreneur? Two colourful couples, a pair of young girlfriends, and people going in and out grabbing food or drinks. 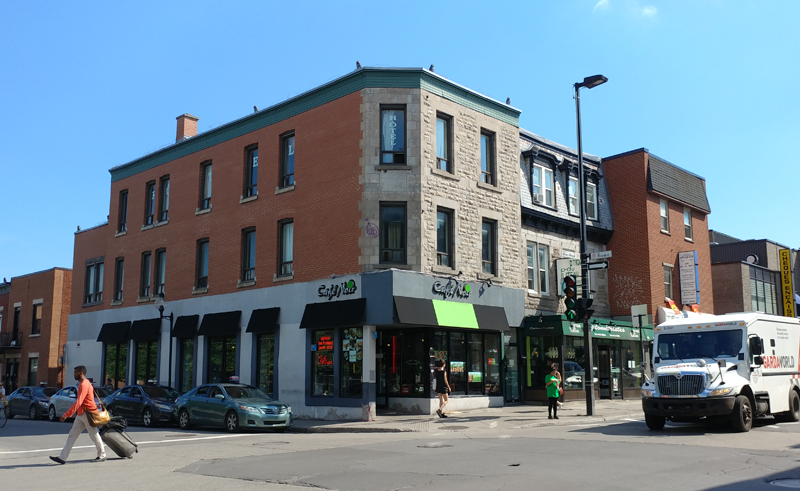 The Cafe Noir below, and the hotel right above it.

Finally, it was time to go check-in. But to my dismay, the guy at the reception told me that my room was not ready yet. He told me I could leave my stuff while I go venture out. I was reluctant in leaving my laptop which was the only valuable thing that I would leave behind, but I also didn’t want to carry a Macbook Pro (older version) with me. 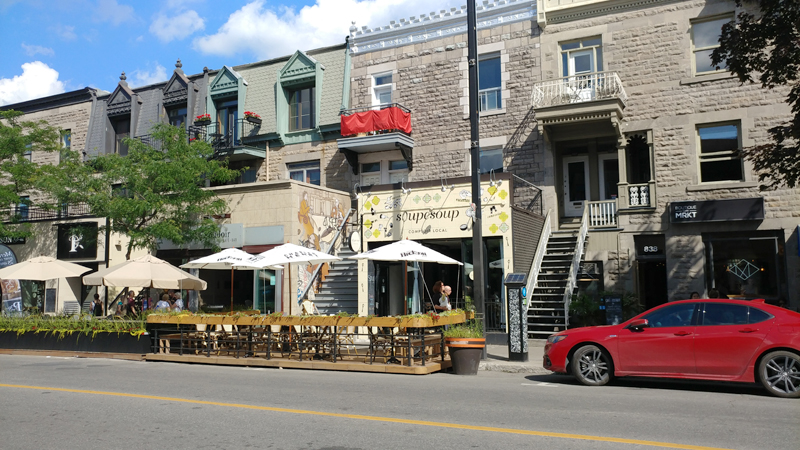 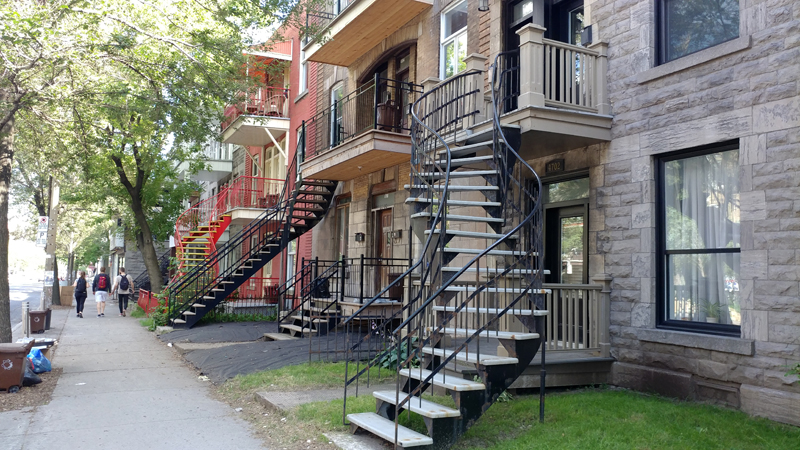 External winding staircases to the entrance to apartments

I walked around the Mont Royal neighbourhood. It was nice to see a different scenery of Canada that I was so accustomed to seeing. These outdoor staircases in front of apartments were interesting. The European look and style of homes and shops. 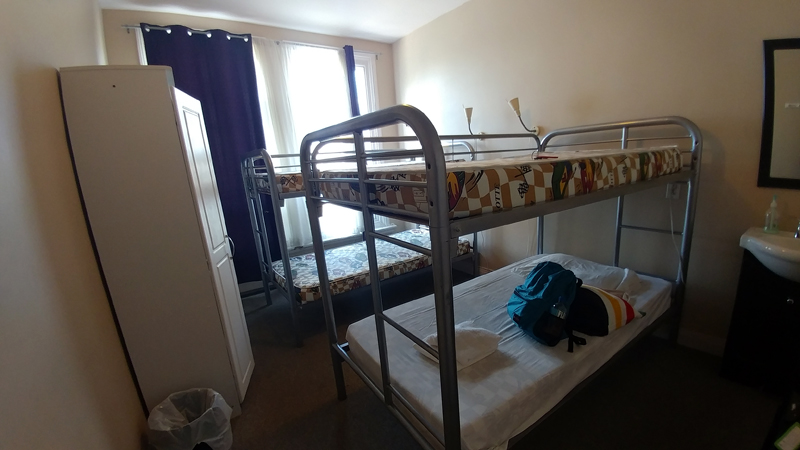 I got a 4-bed bunkbed, not the double-bed room I booked and paid for!

Afterwards, I was back at the hostel. I got the keys that were left behind on the reception desk. My things were gone – and I hoped that they had properly been moved to my room. To my shock and huge disappointment, I got 4 bunkbed room – and they weren’t even great ones. They were really flimsy. The mattress was too short so my leg hanged off the edge. The fan rattled like crazy. The humidity, smell of sweat and stuffiness was terrible. I wanted to throw up or felt like I was going to develop a headache. All the power outlets were broken except one. The bed lamps were both broken. Noise from neighbours could be heard. Liars! I booked a double-bed room and PAID for.  A private one. Sure, I didn’t have to share the bunk-bed room with anyone, thank God, but this is false advertising/marketing!

I tried to let it go, and went out again. I had some Poutine at La Brasique. I ordered the regular, but I couldn’t even finish it. My god, fries, gravy and curds…so filling.

At night, it was a nightmare. Oh god…there’s a subway station across the street and there were buskers or performers on loud mikes past midnight…and I couldn’t close the window or I would suffocate from the heat, as if I wasn’t already. And they had been singing the same song for the last 20 min!

I felt nauseous, not just from the bad smell, but maybe from heat exhaustion. I woke up several times in sweat, sometimes my arm and leg would start to tingle. I wanted to cry. I decided that although I wanted to keep my expenses low, this was not acceptable, and that I would have to go elsewhere the next day. I checked for an Airbnb on the other side of town.